There’s a tweet pinned to the top of Dr. Steve Robinson’s Twitter account. It reads, “We’re proud to be a community college. We’re not going to change our name; we’re going to change your mind.” He's the President of Owens Community College in Toledo, Ohio and the creator of the #EndCCStigma campaign geared to end the stigma long associated with community colleges.

We’re not only consistently impressed with the way our customers have taken VirtualJobShadow.com and made it their own, but also in the ways our customers are becoming the levers of change we need to ensure that the future workers of today have a successful tomorrow.

Dr. Robinson’s Three-Part Theory of Community College Stigma is that we need to first acknowledge that the stigma against community colleges is real. Second, we need to acknowledge that while the stigma is real, it’s not founded in reality on account of relevant curricula, transferable credits, and high-quality faculty. The third part is that the stigma needs to be called out and addressed. It needs to be challenged and engaged directly in order to bring a change.

When asked for a succinct rebuttal to this stigma, Dr. Robinson said that one argument is economics. Community college is affordable, and we direly need an affordable way to produce tomorrow's workforce. "If you look at us as a country," he said, "we're losing ground. We're not producing the highest percentage of college grads in the world anymore. We haven't for a while. There's no way we can get to the level we need if we don't start at community colleges." That's just a piece of the puzzle though. It's more nuanced than that, which Dr. Robinson does an excellent job of deconstructing below.

We didn't stop there either.

Since we’re all about work here at VirtualJobShadow.com, Dr. Robinson was kind enough to share the work that went into creating a social media campaign that has gone viral, spawned a podcast, and anointed him the primary thought leader in this field. Dr. Robinson did us a one up by demonstrating a great professional soft skill here: teamwork. He shared credit for the campaign's success with his Manager of Public and Media Relations, Jared Meade. Inspiration at work indeed!

Enough blabbering on our end though. Please read our conversation about ending the stigma around community colleges with Dr. Steve Robinson.

Editor's note: This interview has been edited & condensed for clarity.

VJS: You graduated from a big-10 research university. What drew you to community colleges?

SR: A ton of my friends went to community colleges where I grew up in metro-Detroit. I went the state university route, but halfway through a Master’s of English Lit, I tagged along with a buddy who was teaching freshmen composition at the local community college. I’m not overhyping this to tell you that changed my life. I sat in that class, looked around, and usually everyone was my same age and background, but here there were people older than my parents, from all walks of life, and the room was full of vibrant discussion.

VJS: What’s been the most beneficial aspect of working in the community college system?

SR: The one that came right to mind is that I can’t think of a better place to learn than working at a community college.

I can’t tell you how many times at a gathering or family event an offbeat topic comes up and I know a lot about it. Last I remember was people were talking about hunting and field dressing a deer. I piped in and someone asked me how I knew about that. I replied that I taught freshmen composition for 15 years and students wrote about interesting things I had no background in.

You will not encounter a more diverse and heterogeneous group of people to work with than you would at one of the 1,100 community colleges in this country. They're a great place to learn and I love learning. I also loved learning at my state school. I need to say here that we are not dragging down 4-year and elite institutions. There’s a place for those and that’s not what this is about. What we do at community college is build a bridge to get to [those schools]. Those schools are waking up to the value we’re bringing to the table. They know this type of student. We are the pipeline for those students.

VJS: Tell me about Owens. How do you help students become career ready? What sort of students are you trying to churn out?

SR: This is two sides of a coin. There are several things we do to help students become career ready. Your product is one of them. We’ve put a lot of emphasis on apprenticeship and internship at Owens. There’s been a big push in Ohio to ramp this up. One thing we’re really proud of is our current marketing campaign. It’s called “Powered by Owens” and is Owens students doing their jobs. Our community of Northeast Ohio is powered by the graduates of OCC. Whether you’re the groundskeepers of the Mud Hens, firefighters, first responders, nursing, healthcare, or do sound engineering. The ads have real people doing real work in our community.

This is an American story. You go into any community in this country and it is run by two year college grads. Or they have four-year degrees but started at a community college. Most of our first responders and police have two year degrees. Hospitals and dental clinics wouldn’t run without us. That's what we want to do. We want to produce folks who are the engines of their community.

VJS: When did you first notice this stigma?

Editor's note: a certain writer grew up in Pennsylvania near a different institution dubbed "last chance community college." This is a geographically wide stigma.

I also grow up with another narrative. My father, who was an assistant attorney general of the United States, started with a two-year degree. He was the first person in his family to go to college, went on to law school, was the dean of a law school, and held the 3rd highest position in the Justice Department in our country. I always knew highly accomplished people went to community colleges.

VJS: Who perpetuates the stigma most?

SR: Our assumptions of two-year colleges are based on lore. The National Association of College Admissions Couneslors (NACAC) asks a battery of stigma questions to HS guidance counselors every year. The data is just appalling. Parents and families overwhelmingly hold stigmatized views of community college. They ask the same questions to college admission counselors and there is almost an inverse. There is almost no stigma, because these are data driven people who know community college transfer students and know that they graduate at higher rates and with higher GPAs  than native students.

VJS: You started this movement in 2018. Why? What was the straw that broke that camel’s back?

SR: I have a 25 minute commute to campus. I value it for prep time and to decompress. I have to admit, It really started in a negative place. These inaccurate assumptions and negative preconceptions irritate me and they have for my entire career. It takes a lot of energy to not have a chip on your shoulder about it. It kind of hit me one morning on my drive in.

We’re proud to be a community college. We’re not going to change our name; we’re going to change your mind. It’s a teaching problem. There’s a great asset in this culture that people don’t have any awareness of. Rather than whine about it, it’s our job to illuminate it. So that’s where the hashtag came from. If you don’t name something, it’s going to fester. Yes, there is a stigma. No, it has nothing to do with quality or rigor. The only way to address or change things is to call it out directly.

VJS: The movement really has legs. What’s been the most rewarding part of this? The most surprising?

SR: The most rewarding part has been hearing people’s voices. In my career I’ve only known the people at my institution or who I do conferences with. What I was surprised over was how almost immediately I had faculty, students, and community college presidents reaching out and saying, “yes, lets have this conversation."

The most surprising thing is something I should’ve thought about. I may be proven wrong yet, but it’s been almost a year. Just about every initiative or cause I’ve ever fought for has always had a natural opponent or enemy. Someone should’ve stood up and said, “there should be a stigma” but that hasn’t happened. No one has opposed this. In all the opportunities I’ve had to write, no one has counterargued.

VJS: You got a lot of coverage, Forbes, Inside Higher Ed, and your podcast. Are you a PR person? How’d this happen?

SR: I don’t have a PR or marketing background. My sister is chief marketing officer of a Swedish company called Racefox, so I’ve been like a sponge talking to her, but I have to give credit where credit is due.

Our Manager of Public and Media Relations, Jared Meade, is outstanding. In one of our first meetings when I became president he said, “Steve you’re engaged, you like social media, we need to position you as a thought leader in something.”

He asked if there was an issue in higher ed. I really care about. We had a great conversation and I had a lot to think about, but I didn’t get back to him for months. He’d ask,”are you really thinking about thought leadership?” I was, but every time I thought about a topic I was passionate about, I was able to think of someone else I'd rather hear talk about that.

I’d say, “well, you know,” and it wasn’t till that ride to work that I came up with it. I sent out that tweet and then Jared came up to my office and told me it’s a really big deal and we have to move on it. It really happened organically. A nice end is that the NCMPR asked us to do a keynote speech about it at a conference in Asheville, NC and we went down and did it together. This was my idea, but he [Jared] really set it in motion.

Editor's Note: The VirtualJobShadow.com office is in Asheville! We'll assume our invite got lost in the mail...

VJS: What’s next? When will the job be done?

SR: I think in 2020 I want to enlist everybody’s help in getting this message out of the choir box. A lot of people in higher ed connect with this idea and it's time to get this out to the parents, families, and a different audience. That’s what’s next.

Impressive, right? Talk about marrying your passion with your priority. If you want to help support Dr. Robinson in his mission, please use the #EndCCStigma on your Facebook, Twitter, or Instagram posts supporting community colleges, providing community college data, or sharing your own community college success story. Feel free to share this interview in any way to help with the 2020 goal of expanding this conversation out of the education world. 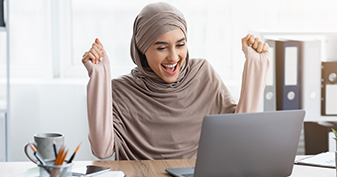 The Changing Meaning of Success Can Inspire Hope

Our third blog on hope discusses how in order to inspire hope, we need to reevaluate what â€œsuccessâ€? looks like. 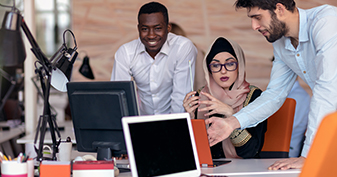 Diversity isn't just the right thing to do when it comes to the world of work, it's also the best business decision. 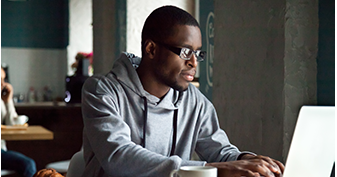 23% of the US workforce currently works remotely at least part of the time. We're exploring all that entails.